Here at the Swell Life, I don’t discuss the economic meltdown, rising gas prices, or the lack of universal healthcare like some folks do. In fact, I’m not voting for either of the major candidates in this critical election, I’m casting my ballot for an old favorite…Bozo the Clown! Well, not actually, but I had to throw in a little political talk, especially since I just watched the town hall debate…anyway…

I took this picture a few days ago at a flea mall and I did briefly wonder if I needed it, but I have so much stuff already and well, you know how it is.

I loved watching Bozo as a kid. We would have to sit in the library when we first got to school and this was always playing on WGN while we waited for the first class to begin. He was so NOT a creepy clown, he was warm and funny and genuine and I could even sense that as a child, which I’m sure was his appeal. I always thought He was really good with children, always bending down to their level and giving them a little side hug and encouragement when they were shy or embarrassed.

I remember how funny Bozo was as he razzed Cooky the clown and the other cast o’ characters. Here’s a pic of the Bozo and Cooky I remember: Oh, and here’s a great article about the Bozo show that enjoyed reading and I know you will too!

But the one thing that I recall and loved more than anything was the GRAND PRIZE GAME!

I thought this was the ultimate game as a kid. I just loved it and dreamed of being on the show and getting to play it. I loved watching Bozo reach into the big giant barrel of mailed-in letters and pull out an envelope of both at boy and girl at home that would get matching prizes of the players that played in the studio. I always thought I would send in really colorful and funky envelope littered with stickers that Bozo would just have to choose…something that would stand out from all the stark white envelopes in the barrel.

I loved when Bozo pulled out that ticket stub and chose a boy and girl from the audience to play the game, but admittedly, I was always disappointed when it was a little kid, like 2 or 3 that was randomly chosen from the audience. I knew that they weren’t capable of winning the grand prize and that it was going to be a really short round. I found this picture of Flickr user sleepoverjesus with Bozo on the Bozo show set (looks much smaller than I remember it being on TV). He got to actually play the game!!!

For anyone not familiar with the GRAND PRIZE GAME, it was a series of metal buckets in a line with the numbers 1-6 on them (I found this fun pic on Flickr of a replica…looks like it’s at a Chucky Cheese type venue). Contestants got just one chance to hit the first bucket, second bucket, and so on. Well, this was the case except when a little kid (the 2 or 3 year old I referenced above) missed the very first bucket. Bozo could let the kid go home empty handed. He always let them try again until they got their ping pong ball in the bucket.

The first prize would always be something like a box of Little Debbie Oatmeal Cream pies and a pack of Topps baseball cards or the like. Usually Cookie the clown brought them out on a platter to show off, very Vanna-like. As the kid got their ping pong ball into each bucket, they got a better prize, anything from a cool action figure to a baby doll or a remote controlled car. But the GRAND PRIZE was always something really cool…a trip to Disney World or a Schwinn bicycle for them and the kid at home.

I rarely ever saw this achieved. As much as it seems like an easy concept, it really wasn’t. As ping pong balls do, they bounced up and down and all around. Occasionally the kids sank the ball into the bucket, but most of the time it hopped out and ended their turn. I think I only saw 1 boy actually win (how very Who wants to be a Millionaire of it!). I remember him jumping up and being so excited. I was excited too! Watching him hit that 6th bucket was like watching the winner being announced on Americana Idol. I was on pins and needles sitting Indian style in that library floor!

Just to let you know how nutty I really was about this game…I set up a version using tins and trash cans at home in my bedroom and used one of those little bouncy balls as my ping pong ball. Unfortunately, I didn’t win any cool prizes.

I actually went a few years ago to the Museum of Broadcast Communications in Chicago and saw the props from the show and the GRAND PRIZE GAME in all it’s glory. Actually, it was stuffed in a room and it looked kinda sad. I really wish I was as photo happy as I am now, I would have gotten a picture for sure!

A couple of years ago, I saw this replica in a decor/kids mag and hmmm….I bet my nephews and niece would like to play it with me. I’d even let them keep it at my house! 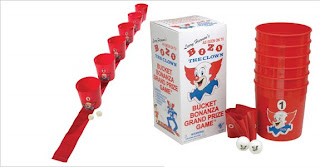 Do you remember the Bozo Show and have fun Bozo memories to share??