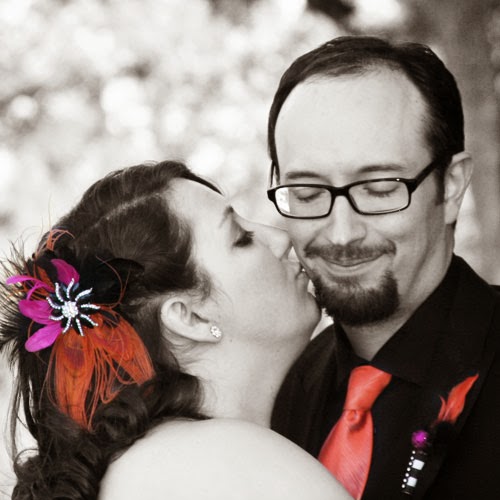 Hello friends! It has been a crazy past few months for me.  In between trying to cram in a few pumpkin projects on my blog, I got married to the most wonderful man on the planet….my William.
Our wedding was held at Indigeny Reserve in Sonora, CA on October 12th and it was an absolutely wonderful day, ceremony, and I’m pretty positive everyone who attended had an amazing time!  That’s what I heard atleast! 😉  These are just a few of the photos from the day, but I plan to share more.
There were a lot of my own DIY elements mixed in, but also a lot of fun things I got off Etsy!  For example, the hair feather fascinator you see above was ordered from Cindy & Lenna of Fascinating Creations on Etsy.  I got it after seeing this lovely photo of theirs. I opted to not to wear the white birdcage accent that came with it…I liked letting the feathers and rhinestone brooch pop on their own!
For William’s boutineere, I actually made that. I made all my own flowers and centerpiece accents. 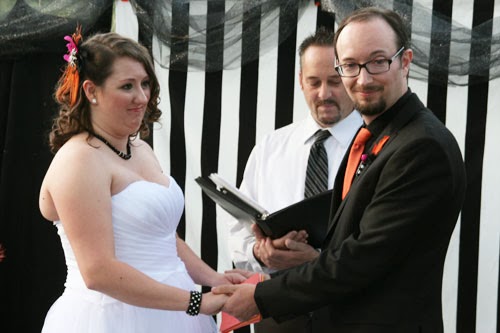 Here’s William and I at the alter.  My friend and co-worker Kristin did my hair and makeup and it was exactly what I wanted.  She also did the hair and makeup for my bridesmaids.  They loved how they looked too!

My jewelry were a few simple pieces I picked up at Macy’s, except for the bracelet, which was a Michaels $2 score.  It matched perfectly with my look!
I found our officiant Ken through Craigslist and he was so sweet and exactly perfect to deliver the loving message on that day.  William’s vows were simply perfect and poetic (he made all the women cry), while mine were lovingly funny. 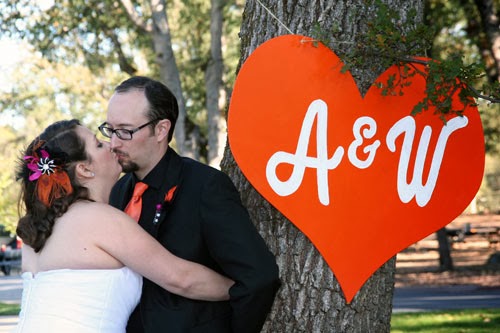 My friend’s Lauri and Connie made the awesome wooden heart you see here…I added the typography details. This was actually the logo I created for the entire wedding and I used it on my invites, save the dates, and elements at the wedding like our favors.  I intended for it to go behind the alter, but I underestimated how much weight the photo stand I purchased for the alter could hold.  My friends who helped set up put it on this tree, which was just as sweet! 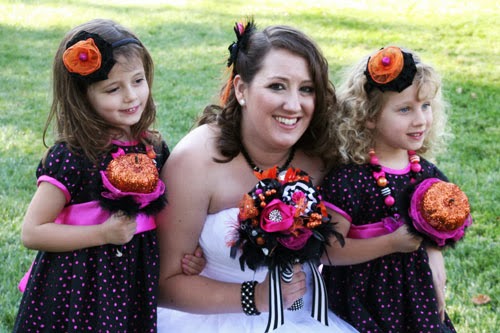 My nieces Ava (left) and Sofie (right) were absolutely adorable.  They became quick best friends for the weekend, which totally melted my heart.  They were so cute holding hands and walking down the aisle with the mini pumpkin bouquets I made them.  I also made my bouquet too. It turned out perfect! As you can see, I was going for a whimsical Halloween look and not a scary one…my main colors were black, white, and orange with pops of hot pink and sparkle!  Of course, there were also a lot of stripes and polka dots.
And how can I not mention the amazing dresses they wore?  They were made by my mom, who is the best seamstress in the world.  They were black polka dot eyelet over hot pink satin! I coined both of them the “Sparkle Sisters” and they would hold up their little pumpkin wands and say it together. Too cute! 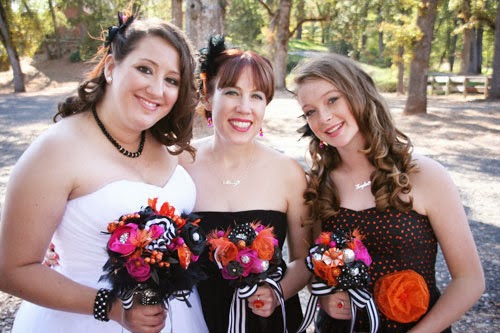 My wedding party was my matron of honor Molly (middle) and my niece Taylor.  I love them so much and they looked so beautiful!  I bought them each personalized name necklaces to wear at the ceremony and made them orange and silver wire rings to wear.  I also made them matching earrings and pretty black and orange feather fascinators to wear.  They were so beautiful. 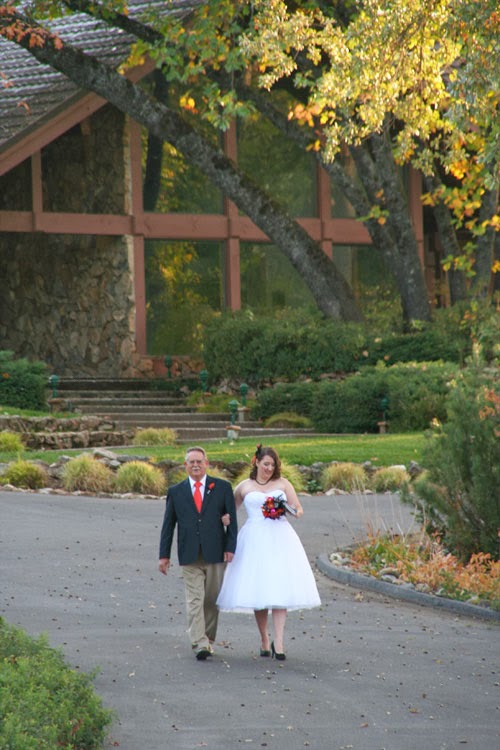 Here’s my Daddy and I as we walked down the driveway to the main aisle.  Haha, it looks like I’m checking my watch.  We walked down from the most amazing house.  I think it was built in the 70’s, but it is really super cool.  My dad doesn’t normally wear black jackets (he prefers navy), but he spruced himself up for my day. 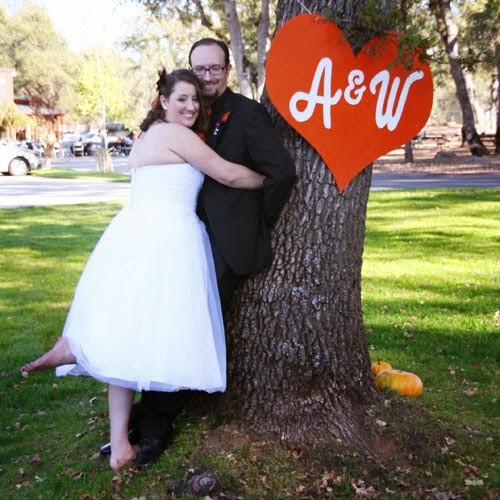 When I tried on dresses, I felt most comfortable in the tea length dress. It was short and flirty and fun!  I also like the retro vibe it had and since I’m swell, I had to go a bit retro.  My shoes were black Rocket Dogs and man did they hurt my feet after a while.  Toward the end of the photo session, I ditched them and went barefoot for a while until I could get into some flats! 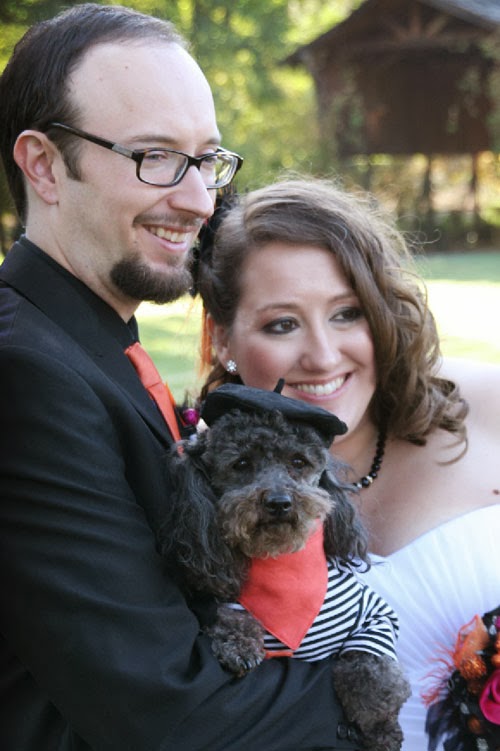 And finally, we just had to have William’s furry brother Frankie as a part of the ceremony.  He wore this cute little outfit by my friend Erika of Sew Doggy Style.  His name is actually Francois, so I wanted him to look like a fancy French Halloween poodle in stripes, orange scarf, and black beret.  My niece Taylor walked him down the aisle and he was so darling!
I’ll share some more detail photos and my professional photos when I get them!  Believe it or not, these great photos were taken by family and friends, mainly William’s Uncle Don!
Until next time Swellions!
Alexa
Tweet
Pin It